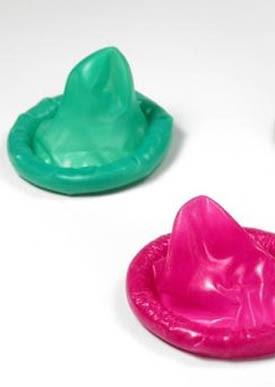 The insertive or male condom is made out of latex and is shaped like a penis. It is placed on an erect penis prior to inserting the penis into another person.  As birth control, the condom creates a barrier between the sperm and cervix (entrance to the uterus).

Pick up free condoms at any WHS clinic

Possible effects that may occur from using condoms are an allergic reaction to the latex in the condom or to the lubricant. If this happens (itching, rash, burning, and swelling of the skin that has come into contact with the condom), try a non-latex condom available in pharmacies, or obtained at the WHS clinic.

To enhance effectiveness of insertive and receptive condoms, contraceptive spermicides such as foam, film, suppositories, or jelly can be used with condoms. Spermicides are available over the counter or at a WHS clinic.They have a chemical in them, 9 oxil 9, that kills sperm. Oil and petroleum based products (spermicides or lubricants) should not be used because they weaken the condoms; instead, water based products should be used. Also, it is recommended by manufacturers that male and female condoms should not be used together (they might attach to each other). Spermicides can cause an allergic reaction in some people (irritation, rash, and swelling). Changing brands of spermicide often resolves this problem.

Many women choose to have the morning-after-pill in their possession in case the condom breaks or comes off. In addition, some women use awareness of ovulation (fertility awareness) by either abstaining from penis/vagina sex when ovulation is occurring, or using condoms during their fertile days. Condoms and spermicide are a good way for women to use in-between birth control methods, or in-between partners, or if they have missed taking birth control pills.

S - Keep condoms in the SHADE. Heat degrades condoms, and causes them to break.

E - EXAMINE the condom's packaging. Feel the package for the air bubble, you'll know the condom hasn't been torn or ripped open.

X - Check the EXPIRATION DATE. All condoms expire, make sure any condom you have is still good.