Webinar – Criminalization as Violence Against Women Living with HIV

“Women living with HIV are likely to have experienced intimate partner violence, sexual assault, and.. trauma resulting from HIV-related, gender, and racial discrimination, along with institutional violence entrenched in discriminatory practices and policies of public institutions such as the
criminal justice system.” Ending violence against women living with HIV means ending all forms of violence, including state-sanctioned brutality and institutional violence. On November 29th, 2016 join Positive Women’s Network on their webinar discussing the impact criminalization, policing, and incarceration have on people living with HIV. Be sure to also check out the HIV Criminalization factseet PDF:   hiv-criminalization-factsheet 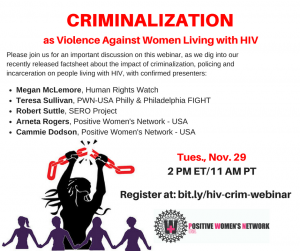