On September 14, 2001 Barbara Lee was the sole member of Congress to vote against the 2001 Authorization for Use of Military Force (AUMF). The vote was 420-1.
Since then, the AUMF has been used to enter into wars without knowing the costs or consequences, and frankly, it is dangerous. It is a blank check for war, and it is far past time we repealed it. That’s why Representative Lee started a campaign on CREDOMobilize.com, which allows activists to start their own petitions.

Recently, Representative Lee asked the Congressional Research Committee to do a declassified report to Congress to inform us about what the AUMF has been used for. The research committee came up with 37 instances of use in 14 countries. That is only the declassified activities. We can’t even begin to speculate on classified uses. The AUMF has been used to justify activities, such as warrantless surveillance, indefinite detention and the lethal use of drones, which fly in the face of our constitutional values. It has been used to justify the operations in Iraq, Afghanistan, Libya, and Syria.

We have engaged in new wars without Congress truly debating and determining their costs or consequences, and without our troops really knowing and understanding whether or not Congress is behind them. We are sending our brave young men and women into harm’s way without congressional authorization. Representative Lee is convinced that open-ended military engagement with no end in sight actually undermines our long-term national security. It does not increase peace and security for the United States or the rest of the world.

Our children and grandchildren deserve better. Can you imagine going another 15 years in a state of perpetual war, without Congress and the American people having a voice in the decision? This is not who we Americans think we are nor who we want to be. A public show of support for this effort is critical to send Congress a clear message that we cannot continue to issue a blank check for the executive branch to wage endless war.

Add your name to Representative Barbara Lee’s petition calling on Congress to repeal the 2001 and 2002 AUMFs to make sure that no future president has a blank check for endless war. 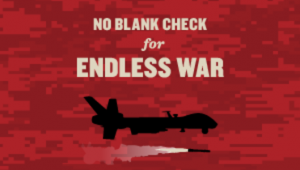