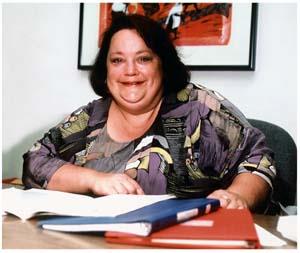 Dido Hasper grew up in Walnut Creek, California. Dido was in high school when abortion was completely illegal and helped women travel to Mexico to obtain abortions.

Dido moved to Chico in 1972, where she became involved in local politics. In 1974, Dido and a group of community women held women’s health night at the local free clinic. No Chico physicians offered abortions, and the local doctors required that women be married to obtain birth control. The women’s group provided pregnancy tests and helped women go to the Oakland Feminist Women’s Health Center to obtain abortions.

The collective group of women learned how to do self-help and menstrual extraction from the Oakland women. Laura Brown, in preparation for her dissertation, "Blood Rumors: An Exploration of Meaning in the Stories of a Contemporary Menstrual Practice” interviewed Dido in 1999, asking her about her first experience with self-help and menstrual extraction. Dido responded:

“Dido Hasper: She didn’t get discouraged”

I was in a group of women who were pursuing the idea of developing a women’s clinic in the Chico community. Some of the women were working at a free clinic on women’s night, and we were referring women who wanted abortions to the Oakland Feminist Women’s Health Center. The Oakland health center received so many of our referrals that they - in their ever so sisterly manner - approached us and said, "You’re referring enough women to have your own clinic. Have you ever considered starting a clinic?” We said that we’d like to consider it. We had a group that was a little bit larger than the group that was actually working at women’s night at the clinic, and two women from the Oakland health center came and shared self-help with us and showed us menstrual extraction. I think there were about 10 or 11 of us at that meeting. It happened at a friend’s house and we did self-exam and discussed menstrual extraction using the Del-Em. I was blown away. Self help was really interesting to me and the whole concept of being able to see my cervix and have that understanding was just phenomenal. I just had an immediate cell level appreciation for what menstrual extraction could mean. But realizing that not only was abortion legal and it was being provided pretty regularly, it was something tenuous. This method of being able to control your reproduction, your periods, right there in your hands: it just was revolutionary to me.

The clinic’s success was not met with support from the local conservative medical community. The local doctors launched an all-out attack on the lay women running the clinic by boycotting the clinic, and refusing to provide medical back-up. Dido led the health center’s response by filing a lawsuit against the local doctors for restraint of trade and conspiracy to shut down the clinic. Years later, the lawsuit was settled out of court. These early efforts to secure adequate medical back-up led to greatly improved medical care for women in the community. The legal efforts by the Chico health center established a model for many women's health projects across the country for developing strategies to confront local physician conspiracies.

However, the battles for Dido and the health center were far from over. The clinic was raided and records were seized by the California Employment Development Department. A case was brought against Dido and six clinic leaders for alleged fraudulent unemployment claims. After a summer-long preliminary hearing, and years of harassment, the bogus charges were dropped against the directors for volunteering at the clinic. Dido and the health center defendants worked tirelessly in the community, and the victory against the state’s charges made front page news in the Chico Enterprise Record. The reputation of the clinic soared to new heights.

SHAUNA HECKERT (PICTURED LEFT, ABOVE) AND DIDO HASPER (RIGHT) ARE EXUBERANT AFTER THE DA DROPPED TRUMPED UP CHARGES AGAINST CLINIC LEADERS FOR CONSPIRACY TO COMMIT FRAUD IN 1988.

(The judge's statement that he felt the defendants were guilty of the charges) doesn't matter. We didn't have a trial. We didn't get to put on our side. After 4 1/2 years of harassment, we're just glad that justice has been served. ~Dido HasperThis is truly a victory. We're free to get back and work at the clinic.~Shauna Heckert

In late 1976, Dido traveled to Los Angeles to work with women from the Federation of Feminist Women’s Health Centers and Carol Downer (co-founder of the first Feminist Women's Health Center and first woman to practice self-help in a group), where she co-authored a manuscript, Women’s Health in Women’s Hands. This manuscript became the basis of three published books by the Federation: A New View of a Woman’s Body, and How to Stay Out of the Gynecologist’s Office, and Woman-Centered Pregnancy and Childbirth. Dido traveled to Mexico and Europe, sharing self-help, women’s health information, and how to start women-controlled clinics. During her tenure as the President of the Federation of Feminist Women’s Health Centers, a nationwide group of women-controlled clinics that shared staff and resources, Dido assisted many clinics across the country. She also traveled statewide and nationally to testify on women’s health and reproductive rights issues.

Dido was a member of the State of California Midwife Advisory Council that developed legislation aimed at legalizing lay midwives. She served as a member of the State of California, Department of Consumer Affairs Colloquium to Redefine the Medical Practice Act. In 1992 Dido served as an Advisory Committee Member to the Little Hoover Commission’s Review of Discriminatory Medi-cal Policies. She was also a member of the
California Women’s Health Collaborative. Dido developed a mentoring program to foster leadership of working class women.

Dido has been recognized locally as one of Twenty Who Made a Difference in Chico, and was presented a California State Senate Certificate of Recognition for her work in preserving women’s reproductive rights. In 1998, the Soroptimist International of Chico awarded her for Advancing the Status of Women.

By the 1980’s, Dido rallied the community and staff to combat attacks by anti-abortion protesters. The Chico clinic was almost closed by 400 protesters from Operation Rescue, the Redding clinic was firebombed three times, and the Sacramento clinic was firebombed and picketed. After many legal battles to defend the clinics against the anti-abortionists, the clinics continue to offer services in Chico, Redding, Sacramento, Santa Rosa, and Petaluma.

INTERNATIONAL WOMEN'S YEAR IN MEXICO CITY, 1975. ATTENDED BY DIDO HASPER AND CAROL DOWNER WITH OTHER WOMEN FROM THE FEDERATION OF FEMINIST WOMEN'S HEALTH CENTERS.

Through her international travels, Dido developed an anti-imperialist and anti-patriarchal world view, and was critical of sterilization abuse and testing of birth control on women in developing countries.

I think we’ve been well aware of imperialism since 1975, when we went to Mexico City and were appalled at what happened with International Women’s Year and how they could have a government-sponsored women’s conference with poor women starving in front and not notice it. We’ve taken the step from seeing it to fighting it, working with international struggles against imperialism and working to ensure feminism isn’t dropped. I’ve seen so many organizations in the last few years drop feminism from their principles of unity. We’ve always seen that we had to fight patriarchy and capitalism hand in hand.

In a Chico Enterprise-Record article in 1993 entitled, Hasper: Making a Difference in Women’s Health, Dido stated that she defined her success by whether or not she accomplished her goals, and whether or not she became discouraged. 4

A true pioneer in the women’s health movement. Dido put the health centers on the map, weathering opposition from anti-abortionists, funding crises, and fighting social bigotry. Using the vital lessons and knowledge Dido shared so generously with all of us, we will continue our work in her memory.